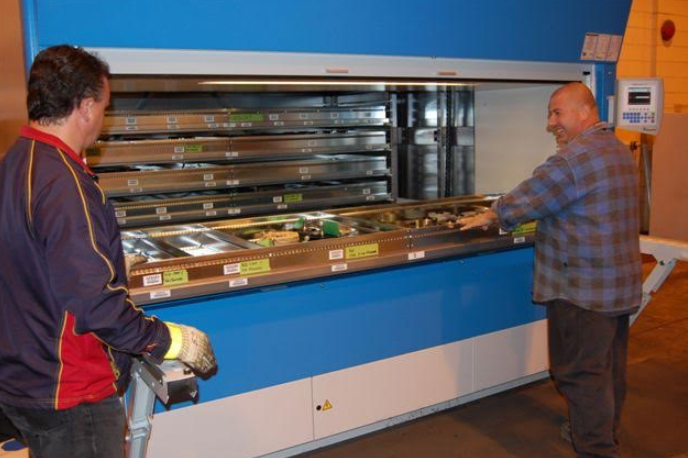 There are many good reasons to buy a Vertical Storage Machine for holding maintenance parts, tooling and related items. You can save a lot of floorspace, improve material handling and ergonomics, keep better control over inventory, and safeguard all consumables and supplies. Plus, people really enjoy working with the machine.

At the Toronto Transit Commission’s massive Hillcrest complex in the central part of the city, two Vertical Storage Machines have achieved all these benefits. The machines are showing that they are well-suited to store and retrieve MRO items, and another four are scheduled for delivery over the next two years.

It’s hard to find any fault with a device that automatically retrieves and presents storage trays on which items may be placed, then puts those storage trays into controlled locations many metres up in the air, out of sight yet always readily retrievable. Just imagine: everything in one place with every level of security that you could want, including access to certain items by key personnel only, courtesy of password protection, and the ability to lock the whole thing up safe and secure when required.

When you look at what the Vertical Storage Machine (VSM) replaces, you begin to appreciate just how attractive and efficient the machine is. In the TTC’s case, VSMs are replacing shelving and bins, − along with a high-level, high-maintenance order-picker truck that services the area. As well, they are replacing a horizontal carousel system with up-to-date equipment and technology.

The TTC’s Hillcrest complex occupies about 20 ha (50 acres) near the junction of Bathurst Street and Davenport Road, just a few hundred meters from the city’s famed Casa Loma, an early 20th-century castle with a commanding view.

Hillcrest is a hive of activity, as befits the largest transit corporation in Canada whose expanding system already serves more than 1.5-million passengers every day. Hillcrest contains many shops responsible for keeping the entire fleet of streetcars and buses running, as well as the repair and overhaul of components for other surface vehicles, and traction motors for the subway cars. There’s a machine shop, a huge transfer table, an upholstery area, a wheel rim fabrication and paint shop, and much more.

As may be imagined, the number of parts and spares to support the operation is staggering − already in the region of 50,000 SKUs (stock-keeping units) and growing fast, as new, electronic-intensive rolling stock comes into service over the next few years.

Planned acquisitions include light-rail vehicles and diesel/electric hybrid buses, while a $700-million contract with Bombardier calls for the delivery of 234 subway cars and spares over the period 2009-2011. There are also big upgrades taking place in signalling, communications and security systems as well as such infrastructure as subway escalators.

“We installed our first two vertical storage machines in August (2007), and they have already become central to our operation,” says Terry Webb, Chief Storekeeper of Controlled Stores and 30-year veteran of the TTC.

Webb already had experience with a VSM, at the Greenwood shop in east-end Toronto where subway trains are serviced. That one is just 3.6 metres (12 ft) high, compared with 6.7 metres (22 ft) for the machines at Hillcrest, taking them almost to ceiling height.

“The Greenwood machine holds 3,000 items, mostly small parts such as electronics,” Webb says. “At Hillcrest, we handle many more large maintenance items, many of which we have already loaded into the machines. These parts are used both here in the shops and at distributed locations throughout the city.”

The VSMs at Hillcrest are all Modula FSEs, manufactured in Germany by Megamat and distributed in Canada by Advanced Storage Technologies of Mississauga, Ontario, a division of Swiss Instruments Ltd. (FSE stands for fast, silent, ergonomic.)

As with every Modula, the machine is designed and built to specific customer needs yet can easily be reconfigured as those needs change. Modula can stand as high as 20+ metres (65 ft) tall, depending on available headroom.

Operation of the Modula is quite straightforward. Vertically, a cable hoist system moves a lift platform up and down quietly, quickly and reliably. Horizontally, a crank drive accelerates the removal of a tray onto the lift platform. The platform takes the tray to the access point (there can be several, if required) and returns it after parts picking.

Each of the steel storage trays at the TTC measures 810 x 2640 mm (32 by 104 inches) and is 50 mm (2 inches) deep. Spacing of the trays in storage is adjustable in 12 mm (½–inch) increments, to accommodate loads of different profiles. There are 56 trays in each of the machines, a number that is entirely flexible.

Items that will ultimately be stored in the VSMs include some real heavyweights, including fasteners, transformers, rebuilt items and brake components. That’s why the TTC specified VSMs with galvanized steel trays that are capable of handling 545 kg (1,200 lb) each with minimal deflection. Four-point suspension of the tray-carrying platform ensures that the machine can cope with uneven loads.

At present, the TTC is using plastic bins for storing some products on the trays of the Modula, though this method is not wholly suitable for all items.

“We find that with the plastic bins, it is difficult to size them exactly and we lose some space between them and around the edges,” Webb says. “A divider system would be preferable. It is a bit more expensive but can be customized to fit the trays and to match our storage needs exactly. This is something we can adjust and experiment with over time.”

Webb emphasizes that taking advantage of space “up in the air” is the main attraction of the Modula, since that space usually goes to waste. “The machine frees up a lot of floorspace that can be used for other purposes.”

Webb is quick to add that there are other benefits too. “You can always find what you are looking for, and the Modula keeps everything clean and free of dust. Now, the parts come to us. The operator just counts and picks, and it’s bag, tag and away it goes!”

The TTC Modula have their own computer servers. A pick list is generated by the main inventory system and sent to the server, where it appears on screen. At the direction of the operator, the Modula retrieves the appropriate tray and brings it to the operator to pick from.

“The VSM doesn’t need to know the quantity, only what is stored and where − information that it has in memory,” Webb says.

“We calculate that we were able to get 16% more material into the Modula and save 140 square feet (13 sq m) of space that we can now use for other purposes, including extending the pallet racking to accommodate really large items. In addition, we can eliminate one of our three high-level order-pickers.”

When the next four Modula are installed, the TTC will be able to reclaim even more space by eliminating some horizontal carousels currently used for parts storage.

“We will be able to empty out the contents of four large horizontal carousels into the VSMs and gain additional floorspace,” Webb says. “Though they have served well, the carousels are becoming difficult to service. The vendor no longer supports them and people don’t like working with them, especially compared with the VSM.

“The operation is much faster with the VSMs. As well as being friendlier, there’s less repetitive bending and stretching, and no risk of accident with the ladders. It’s also much easier to put material away and keep track of exactly where it is. Operators like the VSMs − so much so that they have adopted an attitude of personal ownership toward them. You really can’t ask for more than that!”

Richard Rix is a Toronto-based business writer and may be reached at 416-449-0878, email: richardrix@sympatico.ca